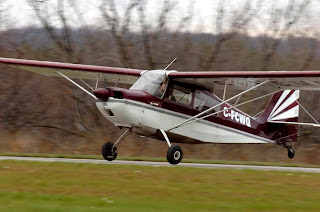 Wx finally cooperated long enogh to let me fly almost every week after that “out of control” class. Couple of lessons later I thought I got it all figured out. I could do a good 3-point landing, remembered to pull stick all the way back (well, most of the times) and to be quick with my rudder inputs. Dancing on the pedals is exactly how that quickness felt like. I felt like it was finally ready to go solo.
And then there was x-wind. It was not bad in terms of strength, but it was quite an offset to Rwy heading – not quite perpendicular, but roughly 60 degrees. Having done one circuit with instructor, it was back to square one for me –same feeling of being out of control. I though I had good x-wind technique as my original PPL instructor made a point of going out and practicing with me in some decent x-winds. However all that practicing seemed to have gone out of the window when it came to landing the Citabria.

Thinking back now, the fundamental difference was that I needed to be much quicker with the controls on Citabria and do all corrections in small increments. The other difference were hangars and trees on approach to our little rwy that sometimes result in need for completely opposite inputs between 50 and 5 ft in the air. I.e. I would be crabbing into the left, but would require right aileron in the flare to keep the right wing down and prevent the plane from drifting to the left. I never had to do that in a Cessna yet.

It took a few more lessons, but eventually, I got the x-wind landings under control and then the day came when my instructor said that he would get out and I go do a few circuits solo. Nothing could ever quite compare to ones first ever solo, but this one came close. I think was slightly more anxious (thanks to the awareness that comes with a little more knowledge) and I had the real feeling of accomplishment as I worked really hard for it. I did a few circuits and went home proud of myself for taming the taildragger.

And that would be the end of that story, if couple of flights later, the plane did not teach me another lesson about paying attention. I read numerous times that you can only relax when the plane is safely parked in the hangar or tied down. I thought that was a hyperbola and not really all that true. After all, what could happen once the plane is on the ground? Turns out quite a lot could, as I discovered one day when I relaxed after a nice landing and did not do a rudder dance quickly enough.
You could probably guess what the plane did next... Exactly. Headed straight for the side as usual. I reacted before thinking and added power to do a go around, hoever i did not get the tail up to get better directional control. By the time I was flying, at least one wheel did get off the Rwy. Luckily, I got airborne before the plane went completely off the Rwy (did I mention that the little airfield I fly from is on a top of the hill?), but that experience shook me. I meant to go and fly around after a few landings, but decided to stay in the circuit and work on paying attention to all phases of flight – from landing to transition to take off to circuit and approach. And I now know that I will not relax and stop paying attention.
In the end of all that, I am still not sure who tamed who between me and Citabria, but I know darn well that I came out a much better pilot out of that. And yes, I got my tailwheel endoresement and can take passengers.

Great to hear that you made it ... you will be a better pilot for it. With the added advantage of having FUN at the same time.

Glad to hear that you LOVE flying. I have had the addiction since I was 8 and I still have fun with it (most of the time anyway).