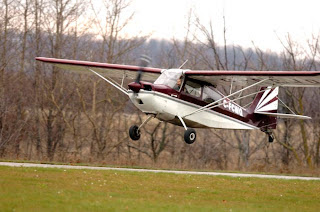 After the first attempt of taxing and semi-controlled landings on the grass, my next few bookings were cancelled due to low ceilings, strong winds, bad visibility or some sort of combination of the above reasons. Which is a long way to say that my second lesson felt like I was having a first one all over again. Except worse.

After pre-flying the plane, we climbed in and got it started. I ran through the checklist and after now customary excursions to the opposite edges of the taxiway, got the plane to the little run up bay. Run up went w/o a hitch and soon I was trying to taxi in the straight line, but the plane was having none of that straight line nonsense and headed straight for the right side. My instructor saved the airplane from certain destruction by intervening and returning it to the centre.

Zigzagging from edge to edge, we finally made it to the beginning. First takeoff was a bit of a handful, but eventually I managed a few decent ones. The in the air part was great and reminded me why I was going through all that torture of learning to fly the taildragger – being so much more responsive than a Cessna, it was a pure joy to fly. As long as I remembered my rudder inputs of courses as that plane felt very awkward whilst uncoordinated.

Landings were another matter entirely. After a few tries, I finally figured out how to do a more or less stabilized approach at the speed the instructor wanted on landing. The narrow, short and upsloping Rwy looked very different compared to the longer, wider and flat runways that I learned at.

Did I mention that that little airport sat on top of a hill? Having attempted to crash us into the side of that hill once (saved by instructor as usual), eventually I was able to fly a stabilized approach into the flare.

It was in the flare or right before it that everything was falling apart for me. No, I did not take my hands of the stick and screamed “we gonna die”, but if I did, it probably would not make much of a difference as whatever I was doing to that poor airplane did not quite facilitate straight and smooth landings.

At the end of that lesson I came home completely deflated and questioning whether or not I was cut out for that. In despair, I started reading the taildragger section of the student pilot board and discovered that pretty much everyone’s first class experience was identical to mine. It is amazing how the simple fact that I was not the worst out there could be such a c

onfidence booster, but I guess that’s the human nature. I definitely felt better knowing that that some very experienced taildragger pilots out there started just like me, out of control, scared to bend the airplane and doubting whether or not they’d make it to taildragger independence.

Having finished reading, I resolved to keep trying and it did get better with time, but that’s another story. For part 3.